A recent article on the BBC titled ‘Kim Wilde says aliens inspired her pop comeback’ left me somewhat miffed when referring to her dad, Marty, as ‘naff’.

Kim is most famous for 80’s hit ‘Kids in America’ – a song so popular it’s been covered by the likes of The Foo Fighters, Electric Six, The Bloodhound Gang and Lawnmower Deth to name but a few (vids below).

What isn’t so well known is that her dad Marty—British rock ‘n’ roll icon of the 50s and 60s—co-wrote the hit with his son (and thus Kim’s brother) Ricky.

Something, that for my money at least, only goes to cement his position as an all time music great. And I’m certainly not alone in that belief: in 2017, Marty was awarded an MBE by The Queen for services to music (see more here). 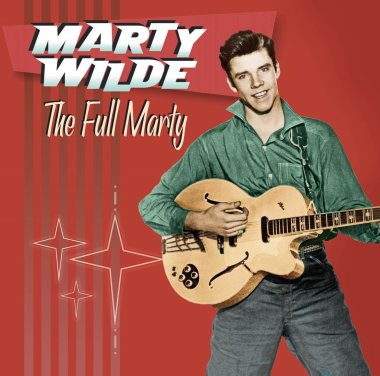 Marty back in the day.

I never really got Twitter, only making an effort to use it as there really isn’t much choice as a self-promoting writer.

The more I do, though, the more its vastly superior value to Facebook becomes apparent (especially in light of all the recent data breach revelations).

It occurred to me that by the power of Twitter I’d be able to easily find the article’s author.

And not only that, Mark Savage was gracious enough to reply to my question:

Heartened, I tweeted back about how I first came into contact with Marty’s music while also mentioning once almost seeing him live in a marquee on Streatham common, but for him having to cancel last minute (he still performs live today).

All was good in the world again.

Then ‘notifications’ alerted me of this added to the thread:

Mark Savage replied to say he completely agreed, reaffirming what he’d said to me.

But it did nothing to stop the Billy Fury Archive getting involved.

By this point, and especially considering how matter-of-fact Mr Savage had been in saying it was the 80’s music press he was talking about, I started to wonder—especially as at the time of reading the article I had a stinking bout of gastro flu (too much information?)—if maybe the article hadn’t been read as closely by me as it should have.

Had I inadvertently started something that had no reason to begin . . .

I went and had another read:

‘Still in thrall to punk, the NME and Melody Maker couldn’t work out what to make of this coiffed pop singer – the offspring of (in their view) the decidedly naff 60s pop star Marty Wilde, who happened to be co-writing all of her singles.’

On the panicked verge of returning to Twitter fully prepared to tweet an apology that’d hopefully stem the steadily growing wave of disdain being directed Mr Savage’s way, I noticed the article date: it showed one after my initial tweet, meaning it had been amended to prevent further confusion.

In the past I’ve tried unsuccessfully on Facebook to get the BBC’s attention re other articles; so for my money at least, a small example of Twitter’s superior Social Media reach.

Covers of ‘Kids in America’ by the bands named above:

There are two types of people in the world and I encountered both today without seeing the face of either.