There’s something wrong with what we feed our cats. It isn’t secretly added or hidden from the ingredients. It’s right there on the label staring us in the face, but apparently we never see it.

The following is a list of meats found available to cats on the first supermarket website searched:

Often there’s mention of with kidney or liver; and also it all being in a delicious jelly or gravy – not to mention the word ‘gourmet’ dropped in here and there.

It’s meant to be CAT FOOD.

Chicken, perhaps; salmon at a push. But cows? How hungry would a cat need to be to try taking down bovine, even a sheep or pig? Don’t even get me started on ocean fish!

Any of the things they’re content to eat when left to their own devices we wouldn’t dream of paying good money for, regardless of how great the gravy or delicate the jelly:

No, we’d never consider ‘gourmet butterfly in soft worm mousse’, but evidently that’s what cats want when left to their own devices.

The list of what cat’s actually eat was compiled from asking social media. I made the mistake of simply asking what they eat that isn’t in a tin or packet specifically for them, when I meant what animals do they hunt.

The list, therefore, was extensive – any cat owner will tell you that if a cat thinks there should be something it can eat, it will try regardless. even it means chewing on a small pebble or piece of paper for a bit before spitting it out again.

In amongst all the answers of cake, peas, mashed potato and pizza (a friend who left an unfinished one on the kitchen side was woken in the middle of the night by one of their cats that had not only helped itself to a slice, but had dragged it up to the bedroom and was eating it on the pillow next to them; lesson learned, but not end of story – despite disposing of pizza remains the next day, the same thing happened the next night, the cat having hidden another slice too) a couple of answers did stand out as only going to prove the point. 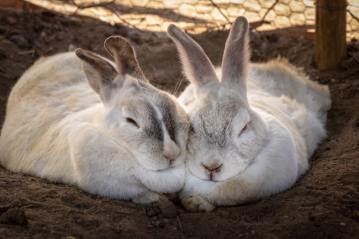 Bunnies: more than a match for the cat, apparently. courtesy Grant Durr

One person said bunnies and another chicken, which (see above) I’d imagined possible at a push, and happened to know they keep, so if anyone would know.

Bunnies: When asked to rabbit further about this (a joke possibly only understood in the UK), they added ‘never dead’; the cat would just bring them in alive as gifts.

Chicken: did they mean their cat had killed a chicken/s, or chicken that had been prepared as part of a meal for humans? It was the latter, though they had had the unfortunate incident of the dog getting hold of one and doing it in, suggesting the cat had opportunity it didn’t take, despite being fed the meat.

Cats are evidently rubbish at killing something roughly the same size as them, never mind a full-on cow, so why would they—the animal kingdom’s monarchs of laziness—bother trying when a simple slug or sparrow will suffice?

It could be argued that to feed cats what they actually eat would be to start breeding and killing a whole set of animals that currently aren’t .

But that is much of the point.

For the industry it’s more convenient and profitable to use the leftovers of that already being killed and not suitable for human consumption, despite the fact literally none of it is what cats naturally eat.

Dressing it up in a way appealing to us creates the belief we’re giving our dearly beloveds (written as keeper of three ex feral cats) top notch nosh, not just the leftovers that can’t be given to us and would end up in the trash otherwise.

Really, the thing getting fed most is egos.

If cats were stereotypically favoured by lads instead of ladies living on their own, I’d happily wager there’d be a doner kebab with chips version!

This post follows on from Animal Crackers: a story of the hypocrisy found at a UK animal sanctuary.