Should cats be banned? It’s a question being asked in New Zealand. In Australia one local council offered $10 for any ‘feral’ cat scalp residents bought in.

The response to An Environmental Catastrophe Clawing at the Backdoor wasn’t quite as I’d hoped. The tongue had not been as firmly in cheek as one had intended.

Yes, to be true, cats being let out to run rampant bugs me

But the poem and intro wasn’t meant to stab those on the wrong side of the message in the face in anything like the way I hoped Verse to Stab Idiots in the Eyes and Ears With would.

More of an annoying little tickle under the armpit if anything.

It was a hot day when posted; too hot for me at any rate.

It’s still poor excuse. I need to become more personally-climate-conscious. Being from the U.K. it was never something I had to worry much about. Here in Canada—as far south as Toronto, at least—different story big time.

That said, summer 2018 in Britain looks like a bit of a bastard. There’s also talk of it becoming a more regular thing; something that’ll no doubt lead to more call for Don’t Sweat It; a poem about summer being a bummer, it can also be printed off and used as a handy aid for nicer toilet seats.

I made a minor adjustment two days after and it made a world of difference to how it reads.

As I saw it, at least; it was still quite warm.

So, it’s normal then
Cats going outside
A natural environment
For them?

The feline’s origin in time
When?
Or maybe more purrtinent
Where?

For bird’s sake
Put a bell on it, please!

And that would’ve been that, but while I was in Toronto thinking I’d gone too far, in New Zealand (direct link follows):

‘Under the initiative, proposed by Environment Southland, cat owners in Omaui will have to neuter, microchip and register their moggies with local authorities.

After their pet dies, cat lovers in the community will then not be allowed to get any more.

It sounds extreme, but it may be something more communities should be considering: after all, cats are responsible for the death of billions of birds and mammals each year – and, according to some, it is all our fault.

Dr Peter Marra, the head of the Smithsonian Migratory Bird Centre, has authored journals and books on the issue.

Contrary to preconceptions about him, he insists he is not anti-cat or against cat ownership.

“Cats make wonderful pets – they’re spectacular pets! But they shouldn’t be allowed to roam outside – it’s a really obvious solution,” he told the BBC.

“We would never let dogs do that. It’s about time we treat cats like dogs.”

In Omaui, officials say the measure is justified because cameras have shown roaming cats preying on birds, insects and reptiles in the area.’

Given the lengths they want to go to, it looks safe to assume the poem’s end ‘For bird’s sake Put a bell on it, please!’ falls well short of anything the experts think will do the job.

I’ve known vegetarian/vegan types who claim to be all for animal rights, yet are unable to see the contradiction in their outdoor more-often-than-not bell-less cat.

Konnie hopes to become a Knight who says Ni, but we won’t let her; while Yoda is quite happy to stay home and bite noses – human or another cat, either or. 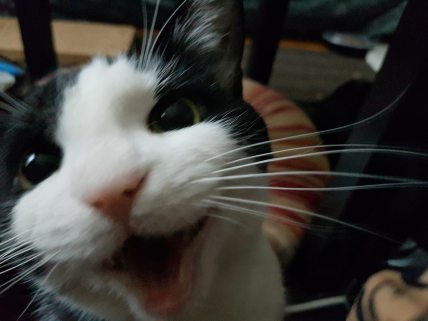 It isn’t always the ‘A normal environment For them’ questioned at the poem’s start given as answer, either. It’s been suggest instead that the ‘so-called’ experts are over exaggerating.

Why would they do that?

Apparently to hide the real culprit – the sudden rise of tall buildings and all their windows.

Why can’t both be an issue?

According to the article, the stats regarding cats alone are:

‘Dr Marra says 63 species extinctions around the world are now linked to the booming cat populations. The problem is exacerbated in areas with very sensitive eco-systems, like New Zealand.

“It sounds extreme,” he says. “But the situation has got out of control.”

It is estimated that as many as four billion birds and 22 billion mammals are killed by cats in the US every year.

Even in the UK, populations are on the decline, and experts blame cats. The Mammal Society says that about 55 million birds are falling casualty each year.’

In lieu of an answer here’s A Poem about Poems about Cats (including more cat pics too!)

The source BBC article quoted above can be found here.